Based on charity, the six-race long Subaru iRX All-Star Invitational presented by Yokohama ended successfully for Sami-Matti Trogen, as he was able to end up second among all the star drivers. As a prize, Trogen got to donate $ 3,000 to a party of his choice: Muijala Primary School in Lohja, Finland, which he himself attended as a child.

Sami-Matti Trogen, who turned 18 on May 13th, managed to shine in the iRacing rallycross series, that included several international motorsport stars. For example Rallycross star Scott Speed ​​and Craig Breen, familiar from the World Rally Championship, were left behind.

The last race of the series on the Hell track in Norway could not have gone better, as Trogen was able to celebrate a win. Overall, the young gun was four times the quickest in the qualification and grabbed two race wins, eventually securing silver in the overall points. The winner of the series was experienced American Mitchell deJong.

- The series was competitively very tight, even though entertainment value was found as well. As soon as the exit lights changed, the race was real, and I didn’t give up an inch; although the rumbles of the first turn in the beginning of the season was about to ruin the driving. Through the series, I got to know new drivers and with Scott Speed, for example, we held a few joint training sessions between the race weekends, sparring each other. I need to be very pleased of the result because there were several well-known guys I left behind, Trogen commented.

The top drivers of the series got to donate a total of $ 10,000, of which Trogen was priviledged to donate $ 3,000. Trogen chose his own former primary school in Muijala in Lohja, Finland, as the receiver.

- I wanted to give my part of the donation to the primary school, in which I have been myself, Muijala primary school here in Lohja, Finland. In my childhood I have received a lot of support from the school, so now it was my turn to support them. I want to point the donation especially in the sports to promote the exercising of kids, Trogen says.

The principal of Muijala school, Taina Hämäläinen, was amazed when the young man told the good news. The donation check was handed over at Muijala School on Friday, May 29th, and was received by Anette Ruti, a teacher from Trogen's childhood, in addition to the principal.

- When we heard the news, we were moved that someone wants to remember their own school and donate – whatever the amount is. This is very heartwarming. It is wonderful to see how Sami-Matti has grown into a young man and has been succeeding in his life. It has been great and interesting to follow his career, Hämäläinen says gratefully.

- Just like also Sami-Matti wanted, we definitely will involve the students when planning how to use the donation amount. We will search for various activity solutions to be implemented in the school yard, from which the students can choose the one they like best, Hämäläinen continues.

Trogen’s own childhood teacher remembers how in the first school years hobby with cars was already an important part of Sami-Mati’s free time.

- I have followed closely Sami-Matti's success, which has been staggering. It always rejoices when a student succeeds and develops! I remember when Sami-Matti started school, he was a small and quiet boy, but active. I knew he was eager to tune cars with his father, and every Monday Sami-Matti stepped into the classroom with his hands still greased from the weekend, thanks to working on cars, Ruti laughs kindly as she looks back on Sami-Matti’s childhood.

Trogen, one of the official drivers of the Williams Esport team, will compete next time on Saturday, May 30th, in endurance race on the Nordschleife track, as part of the iRacing DNLS by VCO R5 series. 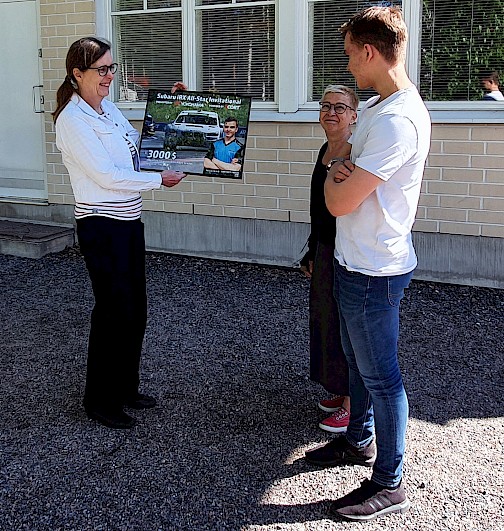