Sami-Matti Trogen competed in the finals of BMW Xtreme series in Pärnu last weekend. During the weekend of three races the best result for Trogen was second. Gear box problems were making the weekend difficult, which make Trogen to start form the back on the third race.

The race weekend was Trogen’s second ever with this kind of car. The first touch on BMW was in the beginning of September at Alastaro Circuit, where Trogen also ended his race on second place at his best.

In the qualifying at the quick track of Auto24ring Trogen was eight. He had only four working gears since fifth gear disappeared. EST 1 team did their best and tried to change the gear box before second qualifying, but without success. Eventually Trogen needed to start from the back.

In the race of 45 minutes, Trogen overtook his competitors one by one – something in which he is very good at. After starting from 16th starting position, on the finish line he was able to drive third quickest lap time and ended up ninth in the results.

- My goal before the weekend was to get the second gear in, I made it every time, but fifth gear as well as reverse were missing this time. What is more, we started with bad old tires, but risk taking didn’t work and the car felt like a toboggan. In the beginning there were no speed, in the end when the track dried a bit I was able to drive better laps and got myself ninth, says Trogen.

On Saturday there were still two races. Start place for the first was eight but the second – thanks to difficulties in qualifying – he started from behind of all the other drivers.

- The first race was great, I nailed the start and raised myself fourth. I was third in the end until driver in front of me went wide to the grass and suddenly I was second. The last race of the weekend was wild! Again I got a good start, but another driver pushed me and I span on the first corner. In the end of the first lap I had very bad luck as there was an accident in front of me and one car slide to my side, and off we went again. I span few times and lost ABS. Without ABS neither worked my brake booster, and tires kept on locking. On the straights I needed to switch off the power for few seconds to make the booster work again. At this point I was so far behind that only thing I did was to drive as quickly as I can. I was able to make the quickest lap though, which was very positive. Speed was there, I got good experience and of course it was fun, Trogen summed up.

Race season of Trogen is about to end as there is only one race weekend of RX2 left. The last race round of RX2 will be held in Cape Town in South Africa. Trogen is now fifth in the overall points. 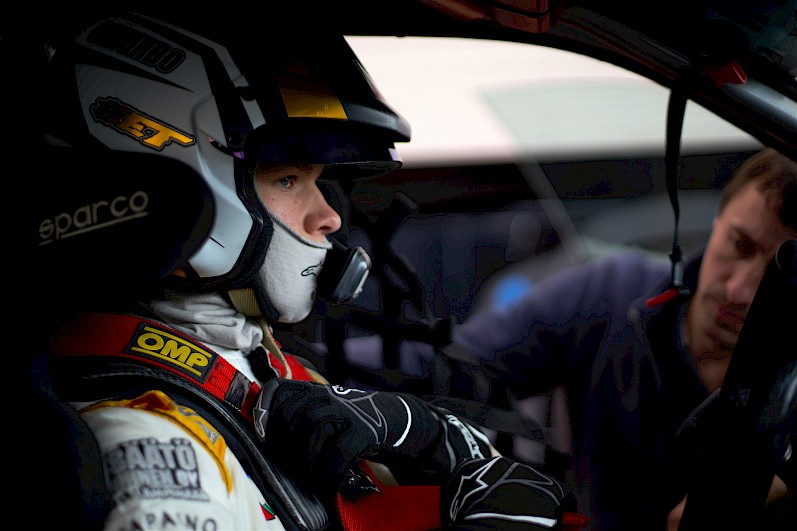